Emerging from the drawing boards of some of the most talented local and international yacht designers, the K Class fleet has graced the sparkling waters of the Hauraki Gulf for the past seventy years. Although the fleet is small in numbers, their reputation for competitive racing and comfortable cruising has endeared them to many sailors.
Amply illustrated with images from professional photographers and family albums, this book highlights the joys of sailing these beautiful boats and captures the spirit and history of the class; offering a glimpse into what it was like for those lucky few who raced and cruised on them. 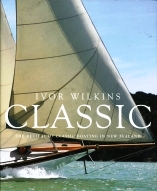 
Now Out of Print but we have stock available!

The first pure racing/pleasure yachts were built from the 1880s onwards by the famous houses of Logan and Bailey, and more than 100 years later many of these masterpieces are still going strong — largely due to New Zealand's very durable, beautiful kauri timber. Their remarkable life stories of success, neglect and restoration tell the story of New Zealand’s history.

Renowned yachting writer and photographer Ivor Wilkins’ stunning coffee-table book celebrates the power and grace and the people who have restored these beautiful yachts to their glory. Waitangi, Rainbow and Ariki, Little Jim and Rona, are the names of but a few of these grand ladies of the Waitemata, and are a few of many ambitious reconstruction and restoration projects which have seen the yachts returned to racing trim.

Each boat is a tribute not only to the original builders but also to their current owners and restorers, who have gone to what might seem incomprehensible lengths to bring them back to their former glory and return them to home waters.

Lavishly illustrated with contemporary and historic photographs, this is a landmark book that anyone with an interest in yachts, launches and sailing dinghies, craftsmanship and design or New Zealand's heritage, coast and history, will cherish.

This book is now out of print, but we have managed to source an overseas supplier with stock.

LAUNCHING DREAMS - PERCY VOSS, THE BOATS AND HIS BOYS
By Baden Pascoe. Hardback,985g, 245mm x 290mm, 152 pages, black and white, sepia, and colour photographs. Published 2013.
A sumptuous pictorial and historical record that celebrates the life of Auckland businessman and renowned boatbuilder Percy Vos, his boats and the people who worked with him.