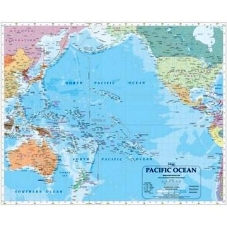 
Completely revised and updated (2009) with enhanced readability, James A. Bier's "Reference Map of Oceania" is the most comprehensive Pacific map in existence. Its main map and 52 inset maps of all major parts of the region provide a wealth of information in one source. Principal cities, towns, and villages are shown along with roads, topography, and population figures where available. The main map's Mercator projection is useful for planning routes. Time zones for the Pacific and individual countries are also included. It is the only map that clearly focuses on the political units of Micronesia, Polynesia, and Melanesia, using as its boundaries the 200-mile Extended Economic Zone. With more than 3,400 place names, "Oceania" will be an invaluable reference for everyone interested in, travelling to, or living in the Pacific islands


Travel atlas of the Polynesian Islands. The maps are at various scales depending on the island, but they all include details such as roads, place names, points of interest, shading for terrain, rivers, lakes, parks, ferry routes, beaches, etc.

The northern part of the map covers the capital city of Quito, Cotopaxi Volcano and National Park, Cuyabeno Wildlife Reserve, the town of Tena in the Amazon rainforest and the country's largest city of Guayaquil. The southern part of the map covers from Guayaquil to the southern and southeastern border with Peru, showing the diverse Podocarpus National Park in the southern Andes and Amazonian ecological systems. An inset map covers the world renowned Galapagos Islands, showing Galapagos National Park and Marine Reserve, Tortoise Reserve and diving areas around the islands.

Included in this map are national flags, population and surface areas and world time zones. The North Pole and the South Pole are shown as insets on this map. Main roads are well classified, as well as international boundaries, capitol and major cities as well as transcontinental railway systems

Return to Top of Page