THE BRILLIANCE OF BIRDS


Who knew that the morepork, our forest-dwelling owl, can turn its head 270 degrees? Or that the eastern bar-tailed godwit doubles its body weight before undertaking an epic and continuous migration of 11,000 kilometres? Or that the tui has a specially placed voicebox, enabling it to duet with itself, sometimes producing sounds too high-frequency for humans to hear?

Zany, off-kilter, wondrous and wild, The Brilliance of Birds gives a behind-the-scenes glimpse into the lives of some of New Zealand’s feathered friends.


Kiwi, kakapo, takahe, moa, tui – these birds, and many others, are unique to Aotearoa New Zealand, and famous throughout the world. It was the 1873 publication of Walter Buller’s A History of the Birds of New Zealand that introduced overseas readers to these extraordinary creatures, and led New Zealanders as well to appreciate them in a way they had not before. Now, a century and a half later, Geoff Norman’s Birdstories builds on that legacy in a compelling, impeccably researched and beautifully presented account, which describes the origins of our birds, their place in both the Pakeha and Maori worlds, their survival and conservation, and the art they have inspired.

Geoff Norman writes of the birds’ unusual evolution, the disastrous impact of two waves of human migration, but too, the late nineteenth-century realisation that extinction need not be inevitable and the astonishing salvation stories of the following century.

Birdstories is a visual delight, rich in sketches and paintings by the scientists and draughtsmen who accompanied the early European explorers, and a remarkable range of works by contemporary artists. Much more than a source of fascinating information, this significant book is also a passionate call for action to save our remaining threatened species.


New Zealand has a diverse range of bird species and is especially important for pelagics. Thirteen of the world's 18 penguin species have been recorded in the New Zealand region (including the Ross Dependency). Nine of these species breed here. Of petrels, 37 of the world's 114 species breed in the New Zealand region, some on the mainland or nearby islands so they can be seen flying around, but many stick to the Southern Ocean islands. Eleven of the world's 22 albatross species nest in New Zealand and of those nine do not nest elsewhere. As well as these specific species, the book covers 50 sites on the North and South Islands, Rakiura/Steward Island and Chatham Islands that are best for birdwatching. 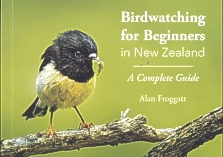 
New Zealand is a birdwatcher's paradise. This book provides comprehensive information and practical advice on every aspect of the subject, including key birding areas, where to find the most sought-after species, how to get close to birds without disturbing them, pelagic birding, bird photography, bird banding, conservation and feeding birds.

Alan Froggatt is chairman of the Kapiti Mana branch of Forest & Bird, a member of the Ornithological Society of NZ and is involved in a range of conservation initiatives on the Kapiti Coast.

Accompanying this illustrated photographic book is well-researched and engaging text that enrich the images’ depicting bird behaviour and biology. Discover which native bird’s undersides have ultraviolet feathers. What underlies the musical prowess of birdsongs, and which New Zealand bird can mimic human speech? Why do adult grebes feed their babies feathers? What special physiological adaptations allow godwits to survive their monumental migration? What impact does climate change and other emerging threats have on the conservation of New Zealand’s avian wildlife?

NEW ZEALAND BIRD CALLS (APP VERSION)
By Lynette & Geoff Moon. Pbk, 148mm x 210mm, 46 pages, 0.13 kg Published 208. Full colour photographs.
New Zealand is known for its birds, and the melodic quality of their song. Here, in one book (with App included) is a selection of 60 of the most popular, important or interesting birds. Each bird entry includes information about habitat, distribution, appearance and behaviour of the bird, along with a description of its calls.

BULLER'S BIRDS OF NEW ZEALaND. THE COMPLETE WORKS OF JG KEULEMANS.
By Geoff Norman. Hardback, 220mm x 187mm, 151 pages, 1.07 kg. Published 2014. Sepia & Full Colour reproductions.
This accessible new edition of the award-winning classic Buller’s Birds of New Zealand includes the complete set of 95 artworks from both editions of A History of the Birds of New Zealand by Walter Buller and the subsequent supplement, specially photographed and reproduced in full colour.

Each bird painting is accompanied by a selection of Buller’s original, descriptive text as well as up-to-date taxonomic information in English and Te Reo Maori.

With a foreword by Stephen Fry and an introduction that traces the history of ornithological painting, and tells the story of Buller and his talented artist, this definitive book will appeal to all those who love New Zealand’s unique avifauna.

This book covers 365 bird species found in the New Zealand region, including all species that occur naturally in the wild regularly within this area, those that have established wild populations and all the rare visitors. Each entry in the book covers a single species, or occasionally, two very similar species, and any sub-species. Common English names, scientific names, most frequently used Maori names and commonly used English or Maori names are given for each species, and also appear in the index.

Whether you are an expert birder, or a casual observer, there will be something in this book to enjoy, or learn from, with hints and tips on photographing the wildlife, learning to identify the birds and learning the sounds and calls of the species (an important part of bird identification). Stunning photographs, this book is a worthwhile addition to any home library. And perfect for travellers or those of us who want to get out and about and enjoy the diverse and rich pickings in the New Zealand avian world. As one Maori proverbs runs:

New Zealand is a bird watchers paradise, and this book, is ideal to keep in your glovebox, galley, backpack or on the windowsill. Keep the Binoculars handy!


This book is the full story of seabirds, looking at the pattern of their lives, their habitats, the threats they face and the passions they inspire.

In ten chapters, each dedicated to a different bird, The Seabird’s Cry travels their ocean paths, fusing traditional knowledge with all that modern science has come to know about them: the way their bodies work, their dazzling navigational expertise, their ability to smell their way to fish or home, to understand the workings of the winds in which they live.

At the heart of the book are the Shiant Isles a cluster of Hebridean islands in the Minch that author Adam Nicolson has known all his life but he has pursued the birds much further: across the Atlantic, up the west coast of Ireland, to St Kilda, Orkney, Shetland, the Faeroes, Iceland and Norway to the eastern seaboard of America, the Falklands, South Georgia, the Canaries and the Azores reaching out across the widths of the world ocean.

This book is a paean to the beauty of life on the wing, but even as we are coming to understand the seabirds, a global tragedy is unfolding. Their number is in freefall, dropping by nearly seventy per cent in the last sixty years, a billion fewer now than in 1950. Of the ten birds in this book, seven are in decline. Extinction stalks the ocean and there is a danger that the grand cry of a seabird colony, rolling around the bays and headlands of high latitudes, will this century become but a memory.


The Little Penguin, Blue Penguin or Fairy Penguin...whichever name you give it, this fascinating bird lives an extraordinary life. It is the world's smallest penguin species found all around the coasts of the southern half of Australia and New Zealand, in spite of the pressures of modern day life it appears to be doing well and even thriving, often just a stone's throw from major towns and cities.

This beautifully illustrated book explores every aspect of the lives of these remarkable seabirds from feeding and breeding to migrations and threats. The entertaining and informative text is accompanied by many beautiful photographs that illustrate aspects of the penguins' life and behaviour which are rarely seen by humans. The book is ideal for anyone interested in birds and conservation and makes the perfect gift for anyone who has witnessed a spectacular 'penguin parade' as the birds return en masse to their nesting burrows at dusk after a day's fishing out at sea.